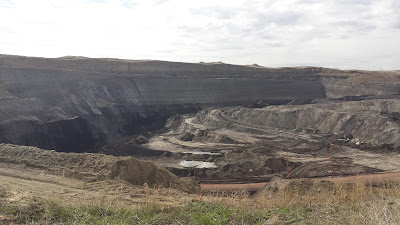 Sometimes you just have to get out of the office and get away from things so you can think clearly. While some investors are very successful simply working out of their office I find that I do some of my best thinking when I am out of my element or visiting a place and experiencing something new.


While I was growing up I was fortunate enough to take a summer vacation with my parents out West every year. Wyoming was always one of our favorite places to visit because of the breathtaking scenery and the outdoor activities. We enjoyed it enough that we nearly moved there once! As you enter Wyoming on Interstate 90 from the East you drive past miles of trains and large coal mines. I was a little obsessed with trains as child and I was also amazed by the size of the mines! I’ve always thought it is pretty crazy to think that we can completely change the landscape of earth.

For the last couple of years I have wanted to go back and take a tour of the coal mines. Yes there are a lot of Youtube videos out there, but there really is something to be said for actually SEEING the sheer size of the operations up close. In addition, there are a number of companies that I have researched that have significant operations in the area including Cloud Peak Energy, Burlington Northern Santa Fe (Berkshire Hathaway), Union Pacific, Rail Link (Genesee & Wyoming, a short-line railroad company), and Black Hills Energy (largest company in South Dakota).

I am going to break this blog into 2 parts because there is a lot of content. I guess I learned a lot last week! The first part is about the Powder River Basin, and its significance for the United States. I will also talk briefly about my fishing adventures while I was traveling. Part 2 of the blog, which will be released soon, will give a brief analysis of some of the companies that operate in the Powder River Basin.

Coal is the largest source of electricity for the United States, representing about 39% of total electricity production. The Powder River Basin (PRB) produces 40% of the coal used in the United States. In short, between 10-15% of US energy production comes directly from the PRB. In the early 1970’s the Energy Information Administration began to realize the environmental effects of high sulfur coal, notably acid rain, which has traditionally been mined in the eastern half of the United States. The EIA then started a push for mining in the Powder River Basin. While relatively low in energy content compared to eastern coal, the coal that is produced in the PRB is very low in sulfur content.

Most of the coal seam in the PRB is 100 feet underground. In order to get the coal out of the ground, the land (overburden) must be dug up and moved. Draglines (large excavators) shovel the earth in their buckets and place it into massive dump trucks. These Draglines are among the largest pieces of machinery in the world and cost upwards of $100 Million each! 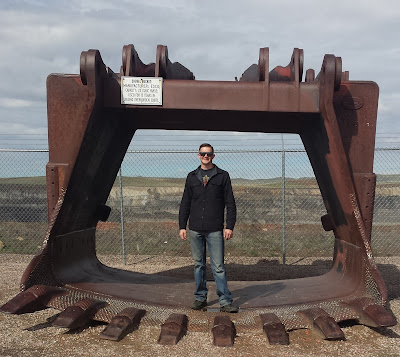 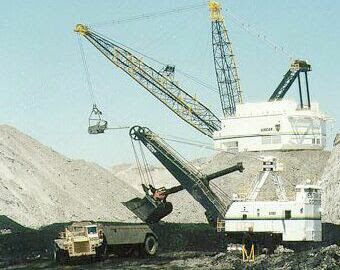 I am standing in an old 24 ton bucket. Some of the new buckets, like the one white ones shown below can move 80+ tons of material!

Once the overburden is removed and the coal can now be excavated. Oftentimes the coal and land must be broken up to make excavation easier. This is accomplished with the use of explosives, mostly ammonium nitrate because of safety in transportation and its cost advantage over explosives like dynamite. Explosives teams drill holes and set the charges into the coal seam. The charges are then detonated and the Draglines go to work loading the coal into the coal trucks and overburden into other haul trucks. These trucks are true modern marvels. The Alpha Mine, where I did my tour, uses mostly 793 Caterpillar trucks that cost about $4.3 Million, hold 1,200 gallons diesel, and can carry 253 tons of material! 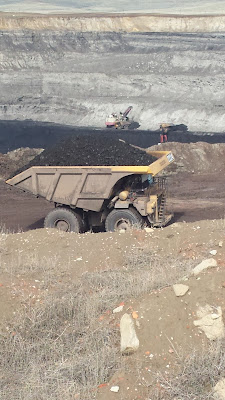 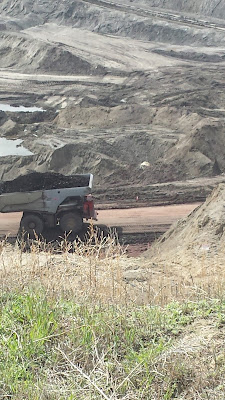 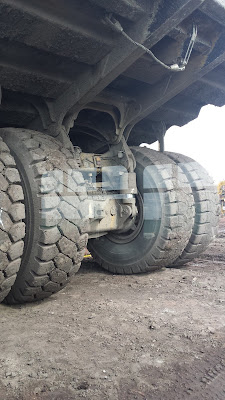 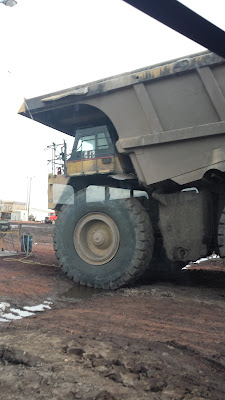 Next the coal trucks drive the coal to the loading area where it is dumped. At the Alpha Mine this was about 2 miles away. Once the coal is dumped it is then tested for its heating and sulfur content, and various other quality issues. Some Utility customers want different characteristics in their coal so the mine employees test and determine the characteristics of each batch of coal. Next they must prepare and organize coal with the correct quality characteristics to load onto the trains for the customers. Trains are loading coal 24 hours a day so this must be a relatively complicated task. Once the batch of coal is prepared it is sent on huge conveyor belts into silo's where it will be loaded onto the trains. 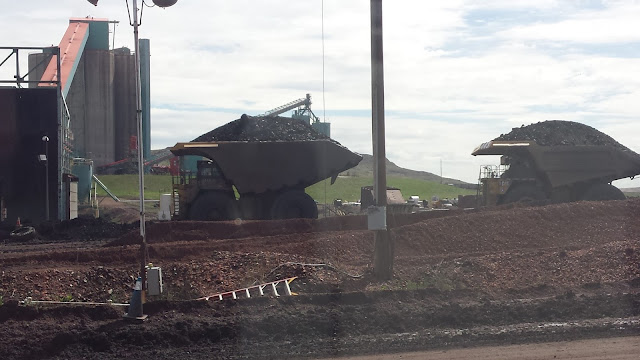 Above is a picture of a truck preparing to dump and the loading facility in the background.

Coal is moved around the country by two main Class I railroads, the Burlington Northern Santa Fe and the Union Pacific Railroad. These railroads drive their 110-120 car unit trains into the PRB, but not all the way to the mine's loading facility. As the trains get close to the loading facilities the Class I engineers exit the train and hand off the driving duties to employees from Rail Link, owned by Genesee & Wyoming, a short-line railroad operator. The Rail Link engineers then communicate with the mine's loading facility to set the correct speed for loading the train, between .5 and .7 mph. The coal is then loaded into the rail cars as the train continues to move. 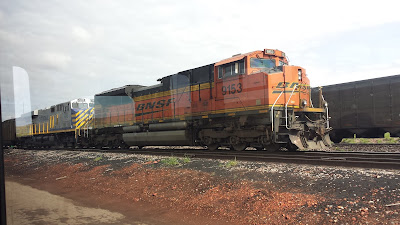 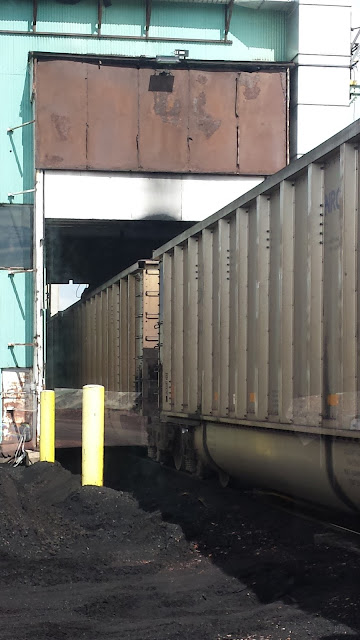 A BNSF Locomotive and coal being loaded into the train cars.

After the coal is loaded it is then sprayed with a dust suppression agent. Once the train exits the loading facility Rail Link hands the train back to the Class I carrier and it heads off to the Utility customer. It takes between one and two hours to load a whole unit train but between seven and eight to unload. Weird right? This is because each rail car must be turned upside down and emptied! Once the train is emptied it leaves the power plant and starts its trip back to the Powder River Basin.

The other part of my trip was to enjoy one of my favorite pastimes, which I have not made time for in the last few years. When I was young I was fortunate to have an uncle who was an expert fisherman. Fortunately I picked up a little bit of his wisdom and joy for fishing.

It was extremely nice to be disconnected from the internet and my cell phone and just enjoy nature. Even if it was just for 24 hours. I find that I do some of my best thinking when I just get to relax and not be distracted. And this time must have been productive because I came home with a lot of new items on my to-do list!

The water was very high and there was flooding in much of the Black Hills. So I knew my stream selection would be limited to the uppermost portions of the streams. Fortunately, the people at Dakota Angler & Outfitter Fly Fishing in Rapid City helped me pick out some good Nymph's and sections of some streams to go to.

Sometimes the fishing crowd can rather secretive about their tactics, but I have always found the exact opposite with the Fly Fishing crowd. In this case I fished next to a fellow angler who fishes the area rather often. I wasn't catching much right away, so he insisted that I come up next to him (I'd seen him catch at least 8 fish in 45 minutes). And of course I started catching fish right away. Funny enough he worked for the Burlington Northern Santa Fe, so I peppered him with questions all day. I had a wonderful time fishing with him and exchanging stories. It really was perfect quick getaway.

The trout that I caught and some of the scenery in the area.

And here is a video of me catching and releasing a Rainbow Trout.


If you would like to subscribe you can do so by entering your email in the Subscribe box in the top right corner of the page.

Posted by Anthony Morley at 6:20 PM No comments: