The Powder River Basin has been one of the most important energy assets for the United States over the last 45 years. But now its future importance appears to be declining. In 2011 coal production peaked at 426.4 million tons but by 2014 had decreased to 381.2 million tons. I believe that further declines in production seem likely as more utility companies are producing energy from natural gas, wind, and solar power. In this second piece I am going to speak briefly to the valuations of some companies that have significant operations in the Powder River Basin. Unsurprisingly, they have all been negatively affected by the declines in coal prices and production.

The WyoDak mine is the longest continuously operated surface mine in the United States. The mine was started by the Homestake Mine Company of Lead, South Dakota and was sold to the Black Hills Corp in 1956. WyoDak is very unique in that it uses a conveyor belt to move the coal out of the mine. As opposed to coal haul trucks like in the rest of the Powder River Basin. The WyoDak mine is also unusual in the fact that not all of the coal is loaded onto trains. Rather it is fed directly to the 335 MW WyoDak Power Plant, which is 20% owned by Black Hills Corp. The other 80% owner of the plant is PacifiCorp, a Berkshire Hathaway Energy subsidiary.

Black Hills Corp owns 16 power plants that generate 841.1 MW in Colorado, Wyoming, and South Dakota. The WyoDak mine represents about 9% of the overall company’s energy production. Utilities are unique businesses in that their rates are regulated by the various utilities commissions of the states they operate in. Because energy use has increased in the past these utilities must expand their operations (capital expenditures). Generally, the state utility commissions allow the utilities to earn about a 10% rate of return on these new investments. Thus, utilities earnings are normally very consistent and easier to predict than some other industries.

In 2014, Black Hills Corp had net income of $129 million or $2.90 per share (in this case net income is a good proxy for earnings). Currently, the stock price is $46.02 for a market cap of $2.06 Billion. Thinking about this as a private investor, I would be accepting an initial return of 6.3%, for a business that will likely grow its earnings by 10% per year in the future. This is not cheap enough to be interesting for me. Now 4 years ago when it was selling for $29, it would have been.

I am not a merger and acquisitions expert but Charlie Munger had an interesting quote at the Daily Journal Meeting in Los Angeles last year.

“Berkshire will have the biggest utility business in the U.S. in a few years. It will be OK to make 9-10% returns, with 0% float money with interest rates at 0. They (shareholders) will live that it isn’t 12%.”

Given that PacifiCorp already has a business relationship with Black Hills Corp. and Berkshire wants to acquire utilities it would not surprise me to see Black Hills Corp be acquired by Berkshire at some point in the future, albeit probably at a lower stock price.

Cloud Peak Energy (CLD)
Cloud Peak Energy is the only publicly traded, pure play, Powder River Basin mining company. The company was originally part of mining giant Rio Tinto but was spun-off in 2010. In 2014 Cloud Peak operated 3 mines in PRB and sold 87.1 million tons of coal, which accounts for 23% of the production in the basin. The decrease in coal tons sold and coal price has hurt earnings significantly. In 2012 the company had $173 million in net income yet this has decreased to $78 million in 2014. 2015 is looking even worse. The stock price has followed suit decreasing from $20 to $4 (-80%), for a market cap of $240 million.

Predicting the future earnings of Cloud Peak is rather difficult. With coal usage likely in a secular decline the company may continue to struggle in the future. The company looks cheap when looking at past earnings, but for now I have to put this in one in the “too hard basket”. 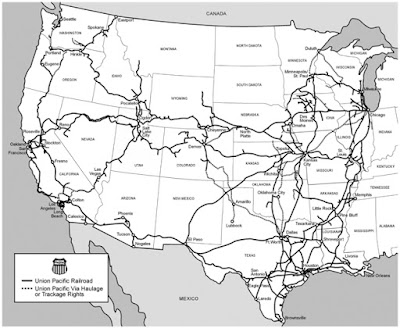 The Union Pacific is one of the two largest Class I railroads in the United States. With the lowest operating ratio, 63.5%, UP is arguably the best managed railroad in the industry. The company derived 18% of its revenues from the coal business in 2014. Coal from the Southern Powder River Basin, including Cloud Peak Energy coal, makes up the majority of this business. In 2015 Burlington Northern Santa Fe, UP’s biggest competitor, had some big issues delivering its customer’s goods on time and lost market share to Union Pacific.

In 2014 I estimate that UP had owner earnings of $4.7 billion or $5.23 per share. With the current stock price of $95.85 we would be accepting an initial return of 5.4%. UP does not interest me at this stock price. Especially when you take into account that the business is operating at a world class level, at some point all businesses make mistakes or run into problems. The coal business also generates some concern because if there is a secular decline then those revenues will have to be made up elsewhere. This year coal carloads are down 7% but revenues are only off 5% because of increased prices. Now, I don’t think Union Pacific will have major problems with its business overall. But, they may struggle to grow the business at an exceptionally high rate like in the past.

One would think the Union Pacific and Burlington Northern train engineers would just drive their trains right to the coal mines to load the coal, but that is not the case. As I mentioned in the previous post, the engineers stop their trains and hand off the driving responsibilities to the employees of Rail Link. The Rail Link engineers then communicate with the coal loading facility and set the train at the appropriate speed, between .5 and .7 mph, for loading. The coal is then loaded onto the continuously moving train. This process usually takes between one and two hours. Once the coal is loaded, the engineer drives the train to the appropriate spot and hands off the train to the Class I railroad engineers.

The Rail Link coal loading business is only a small part of its parent company, Genesee & Wyoming. For the G&W the non-freight business represents 24% of revenues, which is also split between the company's industrial switching and port operations. The exact numbers for each division are not disclosed. The other 76% of revenues come from the short-line railroad freight business that G&W is known for.

In the last 15 years the G&W has purchased 98 short-line railroads. These are mostly located in the US but they also have operations in Australia and as of very recently Europe. As one might guess, the company has seen spectacular growth in Earnings Per Share. When the company IPO’d in 1996 they had EPS of $.29 and by 2014 EPS had grown to $4.58 for a compounded annual growth rate of 15.6%. This is one of the fastest growing businesses I have seen over a long period of time and obviously the managers have done a great job of managing all of the new acquisitions.

In 2015 the company has seen revenue and earnings growth take a pause, because their freight coal and coke carloads have declined 34.4% year over year. But they did just acquire Freightliner, a European rail company, which should increase earnings for the year. Once that acquisition is completed I believe that GWR will have normalized owner earnings in the $6.10-$6.60 per share range. Currently the stock price is $75, for an initial return of between 8.1-8.8%. For a fast growing company this is starting to look interesting.

There is an important caveat though. The company’s debt is in term loans which adjust with interest rates and are mostly due 3-5 years from now. If interest rates go higher this could slow growth from the very high rates we have seen in the past. Also, the short term nature of the debt could potentially cause problems if credit is not easy to obtain. Because of this risk I must wait for a lower stock price than what it currently is at. I will admit it is getting close though. 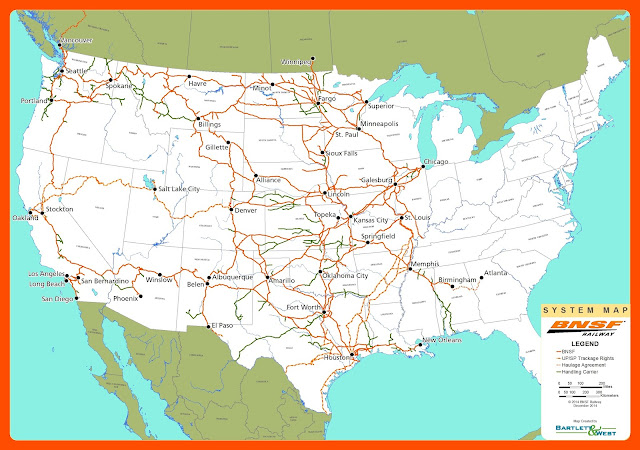 As you can see from the map the BNSF and the Union Pacific have a very similar geographical footprint, mostly the western United States. Not surprisingly, they are very similar companies in size, measured by revenues and net income. The BNSF has a slightly higher mix of coal car loads (+4%) and intermodal car loads (+2%) than UP. While UP moves more chemicals and industrial products (+4%).

Despite being tough competitors both companies have increased EPS by large amounts over the years. In just the last 4 years, UP increased earnings by 20.1% compounded annually and 108% in total. BNSF increased earnings by 13.3% compounded annually and 65% total during that time. BNSF likely would have been able to boost the EPS numbers more by repurchasing shares, but in 2010 it was purchased by Berkshire Hathaway.

The BNSF contributes 11.7% of revenues and 22.1% of net income for Berkshire and will be a very important asset for years to come. Because of the many operations of Berkshire Hathaway I will wait for another post to analyze the company in its entirety, stay tuned!

Posted by Anthony Morley at 2:07 PM No comments: