Daktronics is one of the first public companies that I really started paying attention to. It is one of the largest and probably the most well known public company in South Dakota. I went to college for my first two years in Brookings at South Dakota State University, where Daktronics is based. That is where I met one of my heroes in life, John Sondey. John was an economics teacher whose true passion was investments. Fortunately, as a Freshman in college I met him and he noticed my interest in the stock market. Then he allowed me to take his investing class that was normally reserved for seniors. This was really the beginning of my formal education in investing. During the class he let us invest $12,000 of his own money in 6 different stocks. At the end of the semester if we made money, we gave half of the proceeds to the local food shelf. The other half of the proceeds were distributed to the students in the class! After the last class of the semester that money was promptly reinvested in the local downtown establishments.

Since Daktronics was based in the same town, and had so many connections to the University, it was often a topic of conversation in class. Drs. Aelred Kurtenbach and Duane Sander founded Daktronics in 1968 while they were professors of electrical engineering at South Dakota State University. The company has always maintained a close relationship with the University which has been able to provide it with highly trained engineering talent and other full and part-time employees.

The companies first product was a voting system display that was sold to the Utah Legislature in 1970. In 1971 it expanded the business into scoreboards and in 1973 into commercial displays. The company continued to innovate and in the 1980's successfully sold scoreboards for the 1980 Olympic Winter Games, college athletic facilities, and its first major league facility. In the 1990's the company successfully implemented LED technology into it's video boards and expanded into further product lines. In 2002 the company had its initial public offering and was the world market share leader in LED video displays with over 26.5%. Their market share has since grown to 29%(1). The New York Times had a great feature on the company in 2014.

The company has a large percentage of insider ownership and it seems that it is mostly controlled by the founder Aelred Kurtenbach and insiders. Reece Kurtenbach, Aelred's son, is the current Chairman of the Board and CEO of the company. Jim Morgan, the CEO from 2001-2013, owns a sizable stake in the company and is on the board of Directors.

Daktronics reports its' figures in 5 different business segments: Commercial, Live Events, High School Park and Recreation, Transportation, and International. Below is a brief analysis of each.

You might find these display systems at gas stations, restaurants, casinos, amusement parks, or even in Times Square and the Las Vegas Strip. These displays are typically used to inform customers of events or prices. This business represents about 27% of Sales for Daktronics. It's Gross Margin is also 27%. This part of the business has been seeing larger and more customized displays being built in recent years. I suspect it is likely that this trend continues in the future as displays get better and more dynamic. This business has produced consistent profits overtime, with the only anomaly being in 2009. 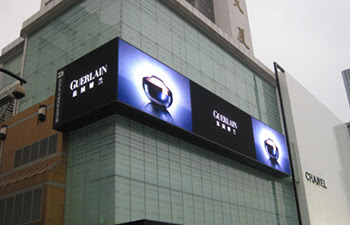 These are the largest and most dynamic of Daktronics video display systems. You will see these in most of the large stadiums in the United States. Some examples include Sports Authority Field at Mile High (Denver Broncos), Levi's Stadium (San Francisco 49ers), and Target Field (Minnesota Twins). New stadiums are building larger video boards than ever and it seems that this trend will only continue. The expected lifetime of this equipment is 8-12 years so once installed their is a natural replacement cycle provided Daktronics can win the job again.

Not only are they building large video boards for replays, but stadiums are adding many smaller banner type boards for advertising and other purposes. For example, the group that owns the Denver Broncos stadium expects a 2 to 3 year payback from advertising revenue on the banner displays they recently installed in their stadium. With such strong returns it is not wonder that other stadiums have been purchasing these boards as another source of revenue.

This business sometimes has lumpier sales just because of the timing of large stadium projects. It currently represents 38% of Sales for Daktronics. It does have lower Gross Margins than the Commercial business though, coming in at 18% in 2015. 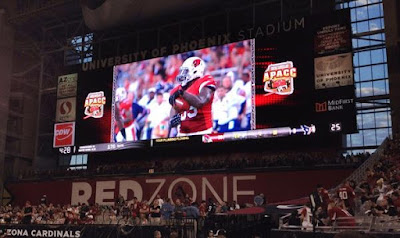 Daktronics is one of the leaders in providing scoreboards for high school athletic and theater activities. This was one of the first businesses that the company entered and has had rather stable sales overtime. Like in the other segments, schools are seeing value in higher end scoreboards for advertising. They are also being adopted as message centers for students, faculty, and community members. This segment represented 11% of Sales and maintained healthy 32% Gross Margins in 2015. 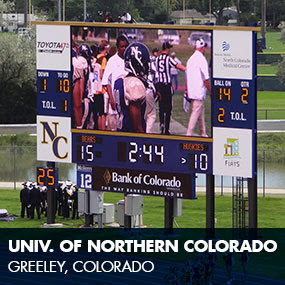 The Transportation business builds signs for roadways, airports, parking structures, and various other applications. I see their signs all of the time on my way to and from the Minneapolis-St. Paul Airport. Historically this has been one of the higher margin businesses for Daktronics. Their Gross Margins have generally been around 30%. This is the smallest business unit though with just $48 Million or 8% of company Sales. I believe the company has a good future in the business as the world adopts more intelligent transportation systems and improved communication systems for travelers. Unfortunately, this segment has more competitors than some of the others so it's growth might be mitigated.

The company includes all business sales internationally in one unit so it is hard to get true clarity on the mix of products. The company says that commercial video systems, digital billboards, and transportation systems are their main products. The large US style Live Events scoreboards have not caught on in the rest of the world yet. Particularly with Soccer stadiums in Europe and South America. FIFA seems to be concerned about crowds becoming agitated over replays, and not having undue influence on the referees. I suspect this will change as stadiums try to improve the fan experience. I know in the US the use of the large billboards is much appreciated by the fans, but time will tell. The company has been growing very nicely internationally, increasing Sales from $51 Million in 2008 to $102 Million in 2015.

I believe that Daktronics has a pretty good competitive advantage. It is certainly not a great one like Visa has but it isn't a terrible one like Airlines historically have been. I would say it is somewhere just above average. The market had about $2.1 Billion in Sales in 2014 and Daktronics has a 29% market share with the closest competitor having just 9% of the market. They operate in a very niche industry that requires rather specific engineering expertise and I think this would be difficult to replicate in a short amount of time. Also, the margins are pretty good but not super high. Thus, I don't see a good reason for another company to pour hundreds of millions of dollars in plant and equipment to try and compete.

And now the most important piece of the puzzle. Over the last 10 years Daktronics has experienced rather lumpy financial results. Despite this, Sales have grown from $230 Million to $615 Million or 10.3% compounded. Owner Earnings Per Share meanwhile have not grown at quite that rate, only about 6% compounded.

Cumulatively, over the last 10 years I estimate that Daktronics made $6.10 and paid $3.05 of that out in a dividend. In 2015 I think Owner Earnings Per Share were around 63 cents (different from the the graph) as their were some abnormal working capital changes.

In the last 5 years the company has decided to pay most of their free cash out in a dividend. While this is not necessarily a bad thing, I tend to prefer a company that can reinvest in its own business. Daktronics has built new plants and added production lines in recent years, but has had the fortunate "problem" of having extra cash around.

I am glad that the company has not repurchased stock. Because, for the most part over the last 10 years the stock was not significantly undervalued. I do question whether they could have made an acquisition that would have helped the company. Maybe a supplier or one of their competitors. I cannot criticize this point to hard though as I do not have a good idea of what that acquisition might be.

In the future I expect Daktronics to continue to grow Owner Earnings Per Share at about 5-8% rate compounded, though this will be lumpy. I also expect the company to continue to pay out most of it's excess cash in a dividend as that seems to be the desire of the founders and management that are on the board of directors.

I believe Daktronics Intrinsic Value is around $7 per share so I would like to purchase it at a good discount to that. Currently shares trade at $8.86. Not excessively higher than my estimate of Intrinsic Value but not at a price that I find interesting. If the stock prices comes down a ways below $7 there is a good chance I would be purchasing shares in Daktronics.

Email ThisBlogThis!Share to TwitterShare to FacebookShare to Pinterest
Labels: Valuations