Right now I am not finding a lot of very interesting, or cheap, investment ideas. Most companies are valued pretty fairly, or appear over-priced to me. But one big exception is Berkshire Hathaway. It has so many high quality businesses with great long-term prospects that it should really be priced higher than it is. I have talked about this with my clients, as it is currently the largest position in our investment portfolios. Below is what I wrote them about Berkshire in 2014, but the numbers have been updated for 2015.

It should be of no big surprise that Berkshire would end up in the portfolio at some point. Warren Buffett, with help from Charlie Munger, has the best long-term track record of anyone in the investment business. Berkshire has grown book value at 19.2% compounded over the last 51 years, or a total of 798,981%. To put this in different terms, Warren Buffett and his BPL partnership bought their first shares in Berkshire for $7.50. Those same shares are now worth $210,530.

Obviously Berkshire has had a fantastic past, but what we care about is the future. The businesses are best described in Warren Buffett’s annual letter to shareholders, which can be found at www.BerkshireHathaway.com. I think that the 2014 letter was his best by far, as he talked about the history of Berkshire and what him and Charlie think the future holds. I will give a brief description of the businesses below. 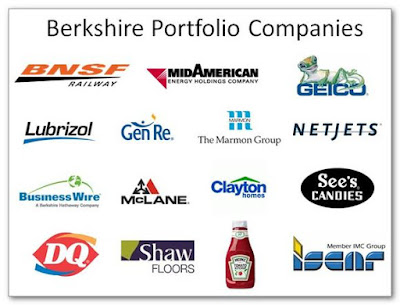 The Insurance business is what has fueled Berkshire’s massive growth over the years. It is represented by Berkshire Hathaway Reinsurance, GEICO, Gen Re, and Berkshire Hathaway Primary Insurance Group (a collection of insurance business). If these insurance businesses generate more premiums than claims in a given year then they essentially are able to hold large amounts of money for free. This is called float, of which Berkshire has about $88 billion. Berkshire then invests as much of this money as it can, in common stocks or wholly owned businesses. In 2015 the Insurance group contributed about $1.8 billion in underwriting profit or about 7% of earnings for Berkshire. This does not count the earnings from the float which are much more.

The next largest business is the Burlington Northern Railroad which contributes about 22% of my estimate of Berkshire’s owner earnings (profits) in 2015. The BNSF operates one of the largest rail networks in North America, mostly in the western United States. Since it was purchased in 2010 by Berkshire it has seen its earnings grow dramatically from about $2.2 billion to $4.9 billion last year. This will be an extremely important asset for Berkshire for many years.

Berkshire Hathaway Energy is one of the biggest energy companies in the United States. BHE is an owner of power companies in Oregon, Utah, Nevada, and Iowa. This is a business that provides about 10% returns to Berkshire that is almost guaranteed to be around many years in the future. Charlie Munger believes that BHE will become the largest power company in the US in a few years. The energy business contributed earnings of $2.2 billion or 9% of earnings.

The last part of Berkshire is a large collection of businesses that sells everything from cowboy boots, to chocolate, Dilly Bars, and industrial parts. Most of these companies enjoy strong positions in their markets and have bright prospects for the future.

Berkshire is a very unique company to value because of its large common stock portfolio, $112 billion at year end. What is unique is that all of these companies are essentially minority interests in businesses that Berkshire owns. But, the only “earnings” from these businesses that show up on Berkshire’s financial statements are the dividends that are paid. Thus, Berkshire has a large amount of what Buffett calls “look-through earnings”, essentially all of Berkshire’s portion of the earnings that aren’t paid as dividends. Some of the companies that Berkshire owns in it's common stock portfolio are Wells Fargo, American Express, US Bancorp, IBM, John Deere, IBM, and Coca-Cola.

To figure out the look-through earnings for Berkshire’s investments I calculated the owner earnings attributable to Berkshire for each company it owns stock in. Then subtracted out the dividends paid to Berkshire. After these calculations I found that Berkshire has about $5.7 billion of earnings that are not reflected on its financial statements.

In addition, Warren Buffett has said that he will not allow Berkshire to have less than $20 billion in cash. Berkshire currently has $61 billion. $22 Billion of which will be used to purchase Precision Cast Parts. This leaves us with $19 billion in excess cash that will be invested at some point, providing future streams of earnings. I will break this down into easier per share numbers below.

We will subtract the cash from the stock price because that money will generate future investment returns for us. We do not know when this will be, but we can all but guarantee that it will happen because of who is running the company.

If we owned Berkshire as our own private business, we would be buying a business that has recently doubled earnings each of the past 5 years that is managed by the investor with the best long term track record. If earnings continue to grow, a highly likely proposition, then intrinsic value will likely grow at a similar rate. In a world where not very much looks interesting, I believe this represents a great investment.

If Berkshire doubles earnings again in 6 years it will be making around $22 per share. If we get that same initial return of 9% that we are getting now that would value the company at around $244 giving us a 12.3% average return. Because of the high quality of the businesses and its managers I believe Berkshire deserves a higher price in relation to it's earnings than 9%. If that happens we would get even better returns.

This is not to be taken as investment advice, but is for informational purposes only. I am not making a recommendation to purchase shares in Berkshire Hathaway. Please do your own research.
Posted by Anthony Morley at 12:17 PM